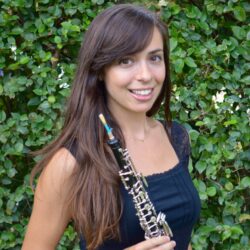 Catherine Weinfield-Zell believes that every student is capable of discovering the immense joys, challenges, and rewards that come from dedicating themselves to the study of an instrument. Firmly rooted in the idea that a strong foundation and grasp of technique is the platform for growth and mobility, Ms. Weinfield-Zell includes enthusiasm, positivity, support, and FUN as the water that makes that tree grow!

A dedicated teacher, Ms. Weinfield-Zell has served as the Oboe and Woodwind Ensemble instructor for the Miami Music Project, a community music program based on Venezuela’s El Sistema. She held the same position with the Miami Arts Charter Middle and High Schools, as well as the South Beach Arts Institute, was a music theory teacher at the New World School of the Arts high school program, and served as the woodwind sectional coach for the Miami Youth Symphony, a training orchestra for advanced high school and college level players. Additionally, Ms. Weinfield has served as the oboe instructor for the Cleveland Institute of Music’s preparatory division, Lawrence Central High School, oboe, chamber music, and music theory teacher at Camp Encore-Coda in Sweden, Maine, and oboe instructor at the Lawrenceville Prep School in Lawrenceville, NJ. She is also the founder of an oboe and English horn reed making business that send reeds to students and teachers alike across the United States.

From 2012-2016, Ms.Weinfield-Zell served as second Oboe and English Horn with the Florida Grand Opera. From 2009 – 2013, she held the position of both Assistant Principal Oboe and principal English Hornist with the Honolulu (now Hawaii) Symphony and the Hawaii Opera Theater. Ms. Weinfield has also performed with the Cleveland Orchestra; the Metropolitan Opera; the San Diego and Charleston Symphonies; the Naples Philharmonic; the new-music ensemble Alarm Will Sound; the Canton, Akron, and Princeton Symphonies; the Philadelphia-based Symphony in C, as well as the Philharmonic Orchestra of the Americas, an orchestra made up of North, Central, and South American musicians.

Ms. Weinfield is also Associate Principal oboist of the Strings Music Festival in Steamboat Springs, Colorado, a position she has held since 2010. In addition, she has also been Principal Oboe of the Opera in the Ozarks, the Breckenridge, Spoleto, Aspen, Lake George, and Kent/Blossom Music Festivals, as well as participated in the newly formed Britten-Pears Aldeburgh World Orchestra in Aldeburgh, England.

An active chamber musician as well, Ms. Weinfield is a founding member of Trio de Salzedo, a Miami-based trio dedicated to performing new and innovative works for oboe, voice, and percussion. She has also performed as a chamber musician in the Sitka Summer Music Festival in Anchorage, Alaska, as a soloist with the Cavani String Quartet, featured in recital on WCLV, Cleveland’s classical music radio station, and is a founding member of the Princeton-based SouthMill Chamber Players.