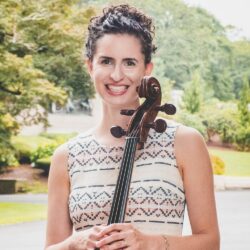 I believe in pushing the boundaries of cello playing. My goals as a teacher are to expose my students to a wide variety of genres and to cultivate musicianship through the study of practical music theory, improvisation, and composition. Lessons involve active inquiry into the relationships between the body, mind, and ear so as to foster the connection between each student and her or his cello, thereby building an understanding of both technique and musical expression. I tailor my work with each individual student to his or her specific desires, needs, and abilities. Every student receives a core technical foundation, whether they are learning the Suzuki method, traditional classical, or fiddle tunes.

Ariel has been coaching chamber ensembles and teaching cello to individuals and groups of all sizes since 2007. She has taught at numerous music programs and workshops from New England to New Zealand, most recently including Point Counterpoint, Berkshire Summer Strings, and the Northeast Massachusetts Youth Orchestras' winter chamber music program. She has also taught at Maine Fiddle Camp, Powers Music School's Fiddling On the Hill camp, Alasdair Fraser's Sierra Fiddle Camp, Brian Wicklund’s FiddlePal Camps, Pinewoods Dance Camp, Sunshine Camp (Australia), and the Southern Hemisphere International School of Scottish Fiddle (New Zealand). Ariel was a Resident Artist at the Conservatory Lab Charter School from 2014-215 and served as cello teacher and director of the cello choir at YOFES (Youth and Family Enrichment Services) from 2013-2015. Her string ensemble, Cardamom Quartet, spent the spring of 2014 as the Quartet-in-Residence at El Sistema Somerville.

Ariel Friedman is a multi-genre cellist, composer, and educator. A winner of the Women Composers Festival of Hartford's 2020 call for scores and a recipient of New England Conservatory's 2018 Alumni Award, she is steeped both in the music of American roots traditions and a broad range of classical repertoire as both a performer and composer. Ariel tours the U.S. and abroad with her sister as Ari & Mia, award-winning songwriters and highly acclaimed as New England’s Americana sister act, and has performed nationally and internationally with many other folk-based groups. She is the founding cellist of Cardamom Quartet, a Boston-based ensemble engaged in reimagining the traditional canon by performing music exclusively by women. An advocate of new music and a composer herself, Ariel performs with Boston Modern Orchestra Project and has written music for and collaborated with many ensembles and soloists including Palaver Strings, Box Not Found, Cardamom Quartet, and the young artists of the Boston University Tanglewood Institute. The 2020 season will feature new commissions, most notably from pianist Miki Sawada for her Gather Hear project.